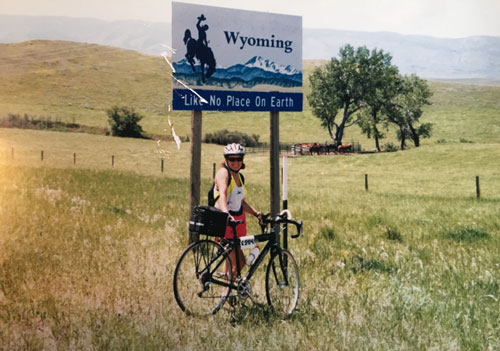 The story begins in June 1998 when Fran Powers decided to ride her bicycle across the United States. Starting in Seattle Washington, the first two weeks were extremely grueling and she continually asked herself “what am I doing here?” On the last day in Montana she began to feel more joyful as she finally noticed her surroundings reveling in the big blue sky, purple mountains and striking wild flowers. With all this beauty surrounding her, she began to sing “The Little Drummer Boy” from the top of her lungs.

As she crossed the Wyoming border she stopped, unclipped her feet from the pedals and stood straddling her bike with her arms high in the air. She had been asking “what am I doing here?” and with complete clarity she now had her answer. She was on the bike ride so she could finally understand one of her life’s purposes. She was to start a theatre to help women and girls honor and celebrate their strengths through knowing and sharing their personal stories. Powerstories Theatre was born!

The idea continued to take root as she rode the remaining miles all the way to Washington DC. When she returned to Tampa, she notified women of an audition opportunity. She simply asked “Do you have a story to tell?”

Eight local women, ages 30 to 70, with little to no acting background were selected to perform for the general public. An original script “Let the Stories Move You” with original music was written to link all the stories into a cohesive and inspirational theatre piece.

Powerstories Theatre debuted in November 2000 at the Friday Morning Musicale in Tampa, Florida. By August 2001 they performed at the Tampa Bay Performing Arts Center to sold out audiences.  By 2010, it won a prestigious Arts & Humanities Award, presented by Michelle Obama at the White House. Today, Powerstories Theatre is branching out onto the national stage with the Advice I Would Give My Younger Self series.

From the Tampa Bay Performing Arts Center to the hallowed halls of the White House, Powerstories Theatre has a rich history and a proud list of accomplishments garnered over its nearly two decades in existence.

This site uses cookies to ensure your best browsing experience.

We may request cookies to be set on your device. We use cookies to let us know when you visit our websites, how you interact with us, to enrich your user experience, and to customize your relationship with our website.

Click on the different category headings to find out more. You can also change some of your preferences. Note that blocking some types of cookies may impact your experience on our websites and the services we are able to offer.

These cookies are strictly necessary to provide you with services available through our website and to use some of its features.

Because these cookies are strictly necessary to deliver the website, refusing them will have impact how our site functions. You always can block or delete cookies by changing your browser settings and force blocking all cookies on this website. But this will always prompt you to accept/refuse cookies when revisiting our site.

We fully respect if you want to refuse cookies but to avoid asking you again and again kindly allow us to store a cookie for that. You are free to opt out any time or opt in for other cookies to get a better experience. If you refuse cookies we will remove all set cookies in our domain.

We provide you with a list of stored cookies on your computer in our domain so you can check what we stored. Due to security reasons we are not able to show or modify cookies from other domains. You can check these in your browser security settings.

These cookies collect information that is used either in aggregate form to help us understand how our website is being used or how effective our marketing campaigns are, or to help us customize our website and application for you in order to enhance your experience.

If you do not want that we track your visit to our site you can disable tracking in your browser here:

We also use different external services like Google Webfonts, Google Maps, and external Video providers. Since these providers may collect personal data like your IP address we allow you to block them here. Please be aware that this might heavily reduce the functionality and appearance of our site. Changes will take effect once you reload the page.

The following cookies are also needed - You can choose if you want to allow them: